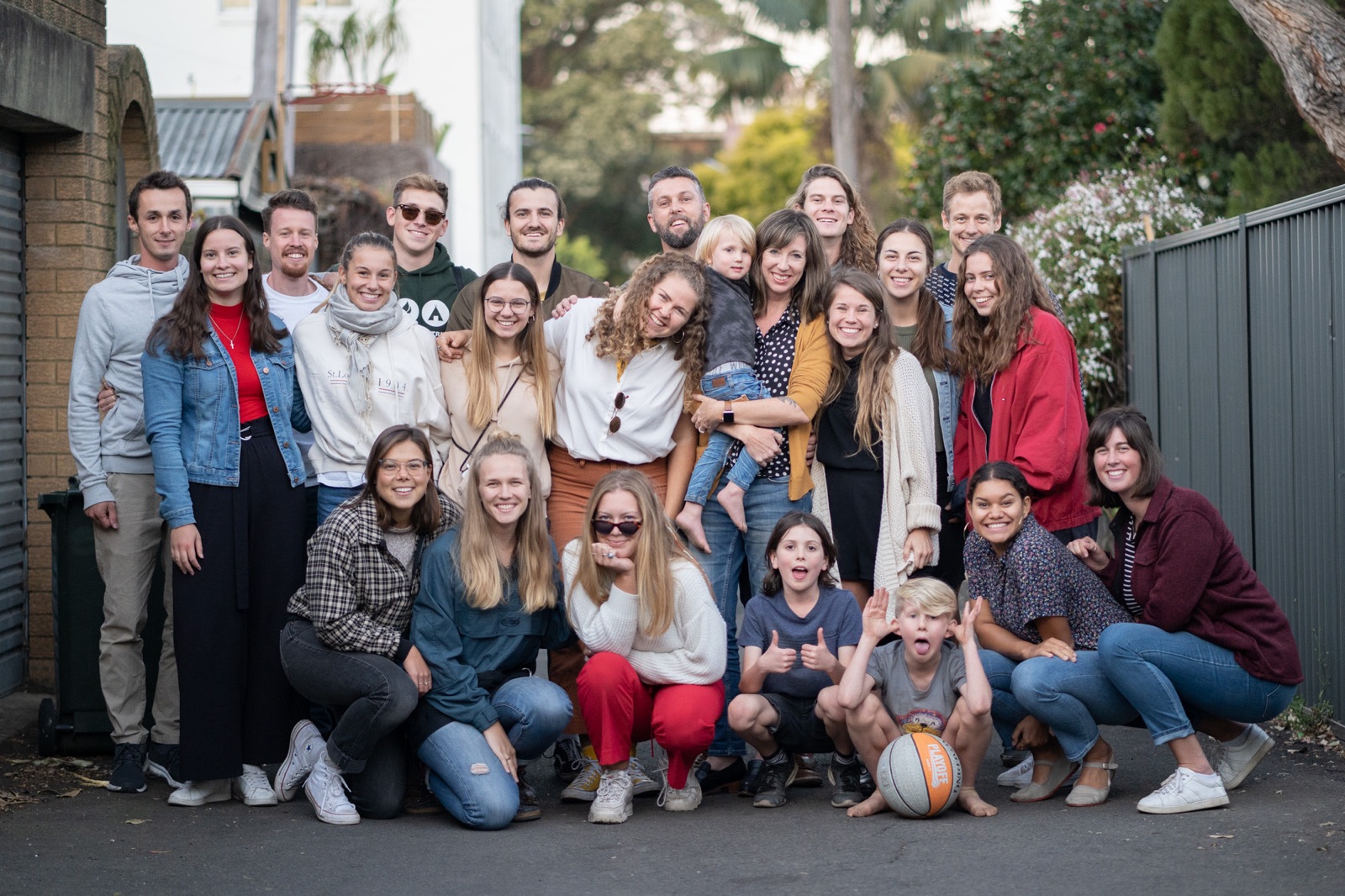 Get to know us

Our team criteria is pretty simple: Do you love Jesus and have a heart to see the city and the nations transformed by Love? If the answer is yes, then there’s room for you to be a part of what we’re doing in Sydney.

Although some of us are full-time, self-supported missionaries (in the “classic” sense of the word), our movement is made up of people from various ministries and vocations, many of which don’t fit into the classic missions mold. We like that. It means we can be united in heart and vision and prayer and community, and yet diverse in approach and methodology.

In fact, we think that’s the way it should be—one family with many members, each outworking the mission of God in the way they are personally called and designed, while belonging to and identifying with something far beyond ourselves. We tend to use the language of “family” as much as possible, because family relationships are how Jesus described believers (brothers and sisters), and because we know what a revolutionary force a health family (community) is in the world.

Ryan and Adriel have served with YWAM since the year 2000. They met and married and began their family in YWAM Australia before moving to inner city Sydney to pioneer our new work in Newtown.

The extended family of YWAM Sydney Newtown consists of several parts, all of which are very important to us:

Find out more
Learn more about our staff

At our core we’re all about fostering community through hospitality, generosity, inclusion, caring for one another, and equipping believers for missional living in any realm of influence they feel called to. We believe every Christian is called to mission; it’s just a matter of finding where our skills, passions, personalities, and the needs of the world collide. We exist to help you do that.

YWAM Sydney Newtown was a dream in the hearts of a young Aussie man and young American woman far before they ever knew each other. Ryan Booker and Adriel McIntosh joined YWAM in 1999 and 2000 (respectively) not knowing God had set them on a path to discover his heart for the world in a way that would eventually lead them to both commit to full-time vocational ministry.

While serving on opposite sides of Australia at different YWAM bases—Ryan in Townsville and Adriel in Perth—they met during YWAM national leaders gatherings and not long after fell in love and married. YWAM Sydney Newtown was born out of two long-time visions for Sydney becoming one.

After serving together at YWAM Townsville for another six years after marriage, the Bookers packed up their two young boys in order to follow God’s leading to inner-city Sydney in late 2014 with the support of YWAM Australia Eldership. They lived in a tiny vintage caravan began the planning and preparation stages of what would become a YWAM base in the heart of inner Sydney. The word God gave them during this season of incubation was: “from little things, big things grow.”

Planting in the inner city

By mid-2015 the Bookers began the work of finding a place to put down roots in Newtown and gathering team and community to help pioneer and birth this new urban missions initiative, and by February 2016 they moved into a boarding house owned by Newtown Mission and began renovating it for the purposes of life, ministry, and growing a team. In 2017 they began hosting outreach teams from all throughout the Australia-Pacific region as well as hosting weekly community gatherings around feasting, friendship, and fellowship. In 2018 they added For the Love of Sydney worship events to our ministry calendar and launched an online ministry to bereaved families. And in 2019 our staff team grew from 2 to 14 and we launched the first ever DTS to run in Sydney’s inner city—the Urban Village DTS.

Who are the ministry leaders?

Ryan and Adriel Booker bring with them more than forty years of combined leadership experience within both the local church and missions contexts. Their main areas of focus throughout the years has been pioneering and leading youth ministries (Ryan), equipping and mentoring leaders (both), pastoral care (Ryan), preaching and teaching (both), project management and events (Adriel), administration and finance (both),  communications and creative story-telling and advocacy (Adriel), and urban ministry both in western and non-western contexts. Between the two of them they’ve led a dozen YWAM Discipleship Training Schools (DTS), more than a dozen YWAM Basic Leadership Schools (BLS), and have been a part of serving hundreds of staff and students in Great Commission community. They have three young boys and a friendly dog who thinks he’s a lap cat.

Who else is on our team?

God amazed us in 2019 with the expansion of our team when it grew from just one couple to a passionate, Jesus-loving team of 14. Friends from YWAM Sunshine Coast invited the Bookers to share their vision for Sydney and recruit staff to join them, and twelve brave, young, hugely talented YWAMers responded to the call. It was miraculous…even if it did all take place on April Fools Day! :)

Let us introduce you to some of our core staff:

YWAM Sydney Newtown is looking for team members who share the same heartbeat: a relentless desire to see God’s Kingdom come. We are not a flashy, established ministry centre running lots of slick ministries and multi-leveled training programs. What we are is a small community of visionary pioneers creating something new in the heart of Australia’s first city—God’s forever dream of redemption for a new day. Some of the specific roles we’re looking to fill are: Bookkeeper, Web Developer/IT Manager, Blogger, Groundskeeper, Outreach Coordinator, and an Au Pair/Nanny to assist the Booker Family. Please don’t let this short list limit you though—we’re pioneering so chances are we need the skills you offer! (Do you think you’ve got what it takes to join us? Learn more here.)

Are you considering joining staff? Read more about becoming a full-timer.

If you are interested in big facilities, slick programs, hundreds of staff, and a well-oiled machine, then we are not the base for you. We are a family-oriented, pioneering ministry in the inner city and all staff that comes to join us must be ready for that challenge and joy.

WHAT DOES THAT MEAN?

It means that you bring your whole heart and roll your sleeves up along with us.  It means that your office space might be at our kitchen table one day and at a hipster cafe the next. You might head up our creative department while also being in charge of hospitality for our guests and making dinner on Tuesdays. You might be our worship leader and our bookkeeper and the guy who picks up mail from our PO Box on Fridays. Or you might be a blogger one day, visit elderly neighbours the next, and facilitate community youth nights on the weekend.

We’re all in this together so you’ll see each one of us taking on a variety of roles even as we pursue our primary gifts and passions. If you don’t like variety, serving one another, or working in a collaborative team, then we’re not the base for you.

But if you see yourself as a visionary pioneer. . . then you may have found the right place. We’re looking for dreamers, creatives, adventurers, paradigm-shifters, innovators, builders, and those who are willing to push the boundaries on how things have always been done. Together we are creating something amazing in Sydney that will be a blessing to the ends of the earth and we’re looking for teammates who are willing to toss their ideas and talent into the mix and create right alongside us.

DO YOU FEEL UNQUALIFIED?

That’s okay. We all do sometimes. The good news is we’re more interested in character, heart, vision, and grit than we are in your resume. We’re committed to training you and walking alongside you as you grow into areas you never thought possible.

Our full-time staff join because they want more than just a job description; they want a community to pursue Jesus and do life with. We are more than ministry roles and job titles, we are a family of believers who are united in our passion for Kingdom living. Hospitality, generosity, kindness, humility, and love—these are our “rules” and these are our “jobs.”

All our full time operational staff—from the newest member to our founding directors—are volunteers, which means you must raise 100% of your own support and will not be compensated with a salary. In order to qualify for consideration as a full time operational staff member, you must first complete our Urban Village DTS or have completed a DTS at another accredited YWAM location. We invite all of our full time staff to enter through our Leadership Communal track to develop your skills and focus for ministry.  Please email us to get the conversation started.